- A step, a stone, a path and a couple of other things 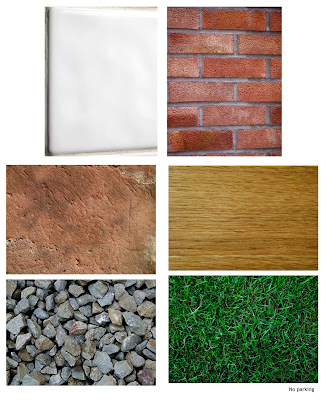 Les Eaux de Mars is an old Georges Moustaki song in the style of a lively bossa nova which starts with the line :

A step, a stone, a path which progresses.

Then goes on to make an arbitrary list of objects, states and attitudes. (The lyrics can be found at http://www.france-jeunes.net/paroles-georges.moustaki-les.eaux.de.mars-2501.htm)

Occasionally I have experimented with this idea photographically, of photographing objects in an uncontaminated way as far as that is possible, neither with the aim nor intention of producing aesthetically pleasing images so much as attempting to grind down the meaning and eliminate extraneous threads of connotation and detonation. Of course it is a vain endeavour because as soon as you commit to any representation or act of communication you effectively lose control of the meanings which may be mined from the utterance. Meaning is in the mind of the beholder. But at least you might be able to park the signifier just a little way off the lawn of Barthes’ notional idea of a degree zero. Odd perhaps for a Buddhist to chase after the integrity of any object being itself a set a processes arising upon conditions in a particular conjuncture at a particular time.

Reading Nagapriya’s book Visions of Mahayana Buddhism, I was very much struck by a quotation where he humself quotes Zhenzie Qingliao quoted in turn by McRae (a bit like opening up Russian dolls!) in Seeing Through Zen: Encounter, Transformation, and Genealogy in Chinese Chan Buddhism,

Without taking a step, you should constantly sit in your room and just forget about the teachings. Be like dried wood, or a stone, or a wall, or a piece of tile, or a pebble.

This is very much in line with the ‘if you see the Buddha on the road, shoot him’ and points towards the fact that the teachings are not the Dharma, practice is: they merely point to the Dharma. Here, nonetheless I stretch out towards a certain purity or integrity in these objects in my mind’s eye much as in the same way as I envisage the segment of tomato in Robbe-Grillet’s description (see the first blog entry October 2009).

Actually, Roy, I think that Moustaki's lyrics are not so arbitrary, and the words are not unrelated; some of them may seem to be but on the whole the song provides a feeling of the passing of time and of the newness of Spring - incidentally in the Brazilian original, Águas de Março (by Antonio Carlos Jobim), March is the end of the Summer - and in Rio de Janeiro the rainest month of the year (see http://www.brazzil.com/p08sep01.htm). So in a way I am glad - at least in relation to your source of inspiration - that your attempts at producing unrelated images is somehow vain...
A bientôt,
Christian

Merci, Christian. You are right of course, and le degré zero which Barthes talked about cannot possibly exist because there is no degré zero - everything is somehow tainted. Maybe it plays on or hints at many other discourses. My pictures, no matter how bland I can possibly make them, speak of so many other things other than themselves (as pictures) or of that which my intentionality meant them to refer (the ‘objects’ depicted). That’s why I said I could only park some way off Barthes’ lawn of degree zero! However, neat though the Eaux de Mars progression might be in depicting the passage of time or seasons there could have been other choices.