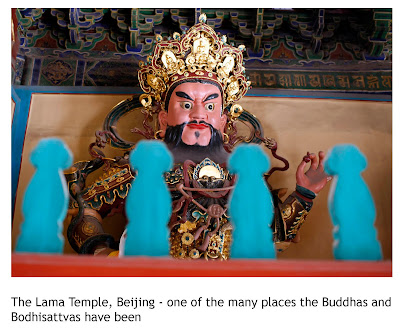 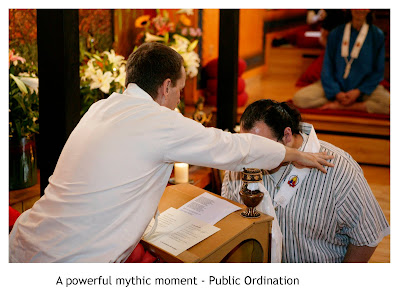 In a week’s time I shall be on my ordination retreat at Padmaloka, the men’s retreat centre (near Norwich) for the Triratna Buddhist Order. It is only a fortnight long but represents the last staging post of the past six years since I asked for ordination. In part the process involves a spiritual death of the old Roy and the birth of the new whoever. All being well – there is always the caution of non-certainty where ordination is concerned – I shall be privately ordained in two weeks time when my private preceptor, Vajragupta, gives me my new name and I undertake to follow 10 precepts instead of 5 I currently follow as a mitra, and make 4 vows. This part of the ceremony represents the fact that I alone go for refuge to the three jewels of the Buddha, the Dharma (the Buddha’s teaching and the path) and the Sangha (the spiritual community I combine with). In just under a week after that I will – all being well – be ordained publicly by Padmavajra. When Padmavajra ordains me and the other ordinand, he is standing in for Bhante, our teacher, Urgyen Sangharakshita, who in turn is standing for Buddha. This public ordination expresses the fact that I am joining the Triratna Buddhist Order. I have witnessed and photographed only one ordination before and it was a powerful experience for all present not just for the ordinand at the time. It all takes place within the highly appropriate context of a retreat which explores the mythic dimensions of going for refuge.

I have just come back from China where I visited a number of Buddhist temples. It was good preparation for my ordination to be on land where Buddhism has established such deep and sinuous roots. I saw monks and nuns and heard chanting and accumulated lots of images of Buddhas, Bodhisattvas, Arahants and other significant icons such as the 4 Heavenly Kings. There were Chan versions, Tibetan and Theravadin styles. But all fingers seemed to be pointing at the same moon, the very same one which, hopefully, will be full for me on the 23rd September.

The very best of luck to you Roy! I will try to be there for the public ordination because I know both of you guys getting ordained.

Be well, and have a good retreat!

congratulations - I hope its a very fulfilling experience for you