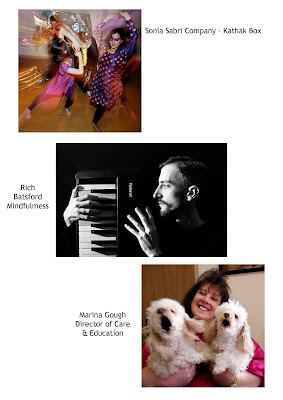 Recently on the work front, I had the creative pleasure of working with Sonia Sabri and Company once again on their latest project Kathak Box which ran for three nights at the Midlands Art Centre recently. It was a diverse blend of dance - kathak, break dancing and hip-hop. Musically it was vocal - beatbox - whereby the human voice made the sounds of various instruments including the tabla. Parts of it were sung in Hindi followed by an English translation basically acknowledging differences within our current British culture but emphasising the common human threads that fundamentally conjoin us. (I felt it was like the last stage of the metta bhavana meditation in that respect.)

I also did a session with Rich Batsford, a musician fiend who has a new album out in the summer called Mindfulmess (his intentional typo I suppose!), following on the remarkable album Valentine Court which came out over a year ago. That was all electric piano, the new one includes his voice.

The variety of my work is what makes it unpredictable. Earlier this week I went to Rutland to take photographs at a school which specialises in catering for kids with autism. I say kids but next year they will go up to provision for up to 24 year olds. This was a really remarkable place in terms of what they do, the people who do it, the kids, the location, and the commitment, energy and feel good factor of the place. Much of which must be due to Marina Gough’s stewardship as head.

I am not done yet done with exploring the world and enjoying being in it with my camera. Not yet.

Nice brace o' posts, Royston.
Still exploring the world too.
Here's a thing: have done 5 months unbroken daily meditation (not continuously you understand, but not missing a day). The tomato still seems to be there, however.

Sounds like you are doing well, Roy: excellent discipline. Why should the tomato not be?

Hi both Roys,
5 months daily sounds very impressive to this sporadic meditator, regardless of what happens to tomatoes! I hope I catch some of your dedication. On the tomato front, I thought I'd add this Zen quote, quoted in a chapter called Conceptual Worlds, in a book called Art & Fear:

I like your explorations Mahasiddhi - I'm glad that particular "not yet" is not yet! Looking forward to seeing some of your Indian explorations here.
Emily.

I'd not heard that song line before - it's fun to hear wisdom repeated across so many different fields, and it sounds like I should do some Diamond Sutra homework! I remember you said the Blues fan song was very Buddhist - it'd be interesting to read about that here sometime, especially with your recent fandom post.

Yes, Keep Right On (to the end of the road) is very dharmic. I will do a talk on that at some time at the Buddhist Centre.