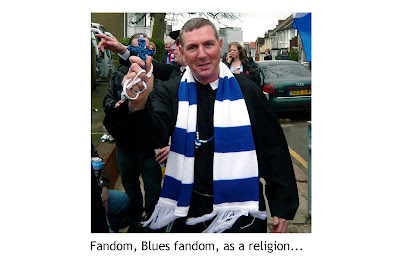 I still don’t know what it means to be a fan. I hold this season ticket for Birmingham City and I wear the blue and white and go along to the games follow with interest bits (not all!) of news about the team and club between matches and I have done so for many many years in my life. I seem to be passionate about the Blues.

Blue is such a significant colour for me. It works on such a deep level that I can’t quite fathom it. It is the colour of the sky, which in Buddhism is coincidental with emptiness (sunyata). When I was ordained the sadhana practice – the yiddam or figure I aspire to – I took was Akshobhya, the blue Buddha associated with the dawn, water, mirror like wisdom, solidity, imperturbability (the names means the imperturbable one) in his earth touching mudra reminding us of the that historical moment when Shakyamuni became Enlightened.

I enjoy being a fan and had the most delightful time last month when along with 32,000 Blues fans we witnessed the unusual event of our team winning a trophy against the mighty and mightily successful (over time) Arsenal. It was great day out and a lovely way to be one with a large gathering of diverse people. I celebrate that more than the differentiation with the opposition and their identity as ‘other’.

I think fandom is a practice. It involves observing my reactions and the speed at which they come up and then deciding what to do about them. Well, most of the time and increasingly that is the case. I am currently working on compassion for referees…