- Walking Away – Luck or conditioned co-production 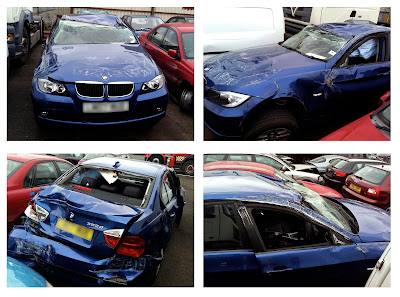 I was involved in a collision on the motorway a few days ago. I was hit from behind by a lorry which sent me into a spin where (I am told) I hit barriers on both sides of my carriageway and was hit by a car which couldn’t stop. My memory takes the form of flashbacks mainly of being in the cab spinning and turning over and as I hear the bumps bangs and scrapes and sound of cracking and smashing glass like bursting ice. The car righted itself and I was able to open the door and walk out in one piece. Apart from very minor injuries which after four days are healing very well I was unscathed. Except for the mental and emotional damage. This latter has stalked my dreams and waking thoughts and was given fresh impetus yesterday when I went to collect my things from the pound and I saw the vehicle again. It looks worse than I remembered but the basic cage and cockpit area was largely intact which kept me safe even through 360 degrees. What a testament to the build of the car. What a testament to something else which I can scarcely name but which takes me towards karma and a strong connection with the benevolent forces of the universe embodied in the Buddhas and Bodhisattvas. Or not. What some may say is luck is just another expression of the complex concatenation of forces, causes and consequences which go towards producing any event, what is called conditioned co-production or pratityasamutpada. Nonetheless I feel lucky and blessed. And still a little dazed and in shock.

Holy Macaroni ! - said Homer Simpson when he travelled into the 3rd Dimension and didn't know what to say.

That's some war story you've got there. How on earth you managed to get out at all, let alone with only minor injuries (except mental pains), is incredible! We're all extremely glad you did.

But your poor beautiful (protective) car... that's sad to see in itself. Well done it. And the universe - good job.

Traumatic memories are tough, but I think you're well equipped with the resources to co-heal yours in time, along with the continued help of the universe, I'm sure.