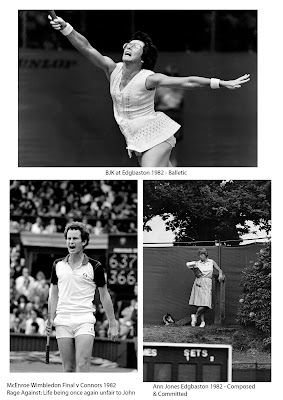 It is that time of the year. Wimbledon is round the corner and the French Open is unfolding in Paris. Sandwiched between the two will the Aegon Classic a women’s pre-Wimbledon tournament now in its thirtieth year. My professional life used to be punctuated, as a sports photographer with a special interest in tennis, by the twin events of the French Open followed a few weeks later by Wimbledon. Sometimes I would pop in at Edgbaston between those two pillars of the Grand Slam circuit as it was local. I remember doing the very first one. Billie Jean King played there and what a delight it was to see her on a court in Birmingham. Court On Canvas, currently at the Barber Institute at the University of Birmingham has a picture of her of mine in it which was taken at that time. There was something quaint and home-grown about the early days of this tournament such a contrast to the well organised chic and hugely enjoyable extravaganza that was (and still is) Roland Garros literally just completed the day before; or to the settled sedate and well established presence of Devonshire Park, Eastbourne. I have a photo from that first tournament in Brum in my book, Passing Shots as well as in the exhibition The Odd Ball, of former Wimbledon champion and fellow Brummie, Ann Jones seen consulting her clipboard with a curled scroll of items to check (I presume) at the top on a mound just behind one of the scoreboards (see poto above). When I say fellow Brummie that is about as close as I can claim to be to one who has won Wimbledon once, the French twice and (I think) is a world table tennis champion twice over!

I reminisce because of the Barber Institute’s intriguing show about tennis with a focus on Birmingham called Court on Canvas. It has been curator by the Director, Professor Ann Sumner and includes some memorabilia, rackets, balls, costumes and paintings from the 1880s onwards as well as a few photos including three of mine – presumably I press two buttons through being a tennis photographer and a Brummie. The oldest lawn tennis club is in Edgbaston, the Edgbaston Archery and Lawn Tennis Club, behind the Botanical Gardens; and not far away, the first game of lawn tennis was played in Ampton Road – in the gardens of a house as opposed to what we called the horse road and played in as kids.

I must go see the show again as when I went my eyes were sore and covered in some healing antibiotic gunge which lent an aspect of dream-like soft focus so the visual experience was hazy to say the least. However, I thought that the early paintings – paintings are very much the backbone and rump of the show – were sociologically fascinating and aesthetically somewhat frustrating. As social documents they represented a new area of leisure activity that was practised amongst a particular set within a stratum of society at a particular time which was deemed to be worthy of representation and for a future regard cast over the shoulder: things noted now for a future past. They were aesthetically frustrating because all the lines were some how inharmonious. There was the net, the players, the women in their ample long skirts, the spectators watching maybe from within the court or from just outside, the court with its own set of lines of delineation. Yet gradually as the game evolves and as representing it becomes more commonplace, the compositions become more ordered and by the 1930s they are much more interesting partly because the painter is not afraid to go for detail rather than trying to depict the whole. (one could trace a similar trajectory in tennis photography much later culminating in the 70s and early 80s.)

I was particularly moved by Ann Jones account of her early encounters with art in her speech which officially opened the exhibition. Ann this past valiant champion, nervous at public speaking, spoke so modestly and touchingly. She told of how she went to an art gallery in Eastbourne when as a teenager she was down there playing in some country championship or other. A fellow player took her to this gallery where she saw a painting which she fell in love with and which moved her with its depiction of the sea along with some interplay with the sun. It suggested something of Wordsworth’s immortality, she said. The painting was 100 guineas and there was no way she could afford it, but nonetheless he eyes were opened and here aesthetic sense awakened. How much do we all value that bourgeoning of aesthetic sensibility and, working in the creative arts how much would we appreciate viewers responding like that to our own work. © www.roypeters.co.uk