- In the Scene only the Seen 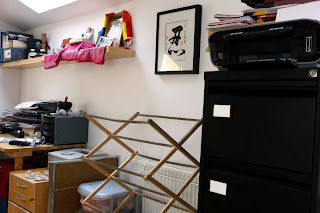 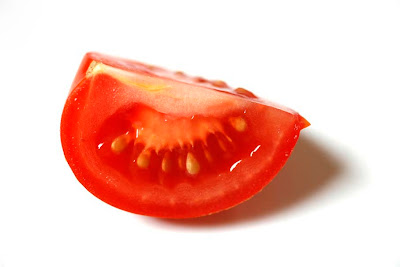 "An impeccably formed quarter of a tomato, cut out of the fruit by a gadget with such perfect symmetry. The peripheral flesh, homogenous and tight, in a beautiful chemical red, is of a consistent thickness between a strip of shiny skin and the bit where the pips are displayed: yellow, with a regular consistency, held in place by a thin layer of greenish jelly along the bulge where the heart is. The latter being of a gently attenuated granular pink, begins from a recess on the underside via a membrane of white veins from whence one extends out towards the pips – albeit in a slightly hesitant way. At the very top, a scarcely visible accident has occurred: one corner of skin, come unstuck from the flesh by one or two millimetres, imperceptibly juts out."

In Alain Robbe-Grillet’s 1953 novel, Les Gommes, at one point he describes in wonderful detail, the segment of a tomato. It is so precise and exact yet it comes to stand generically as such for a quadrant of tomato. In the photographic equivalent or attempt at replicating the written into visual discourse, the representation remains singular and precise – even though we can’t eat either depiction and experience the experience of eating a tomato. I don’t know what surface R-G’s tomato wedge finds itself on but mine is clearly on a white plate. The photo is clearly a mise en scène – as no doubt is R-G’s description at that point in the novel. No matter how simple the shot is by shutting out whole battalions of signifiers, whole regiments are nonetheless there even in the so called neutral choice of background, as well as with whatever distortions and propensities the lens, ISO setting and aperture bring to it.

By attempting to limit and shut out certain other signifiers it’s as if we are trying to lead the viewer down an avenue of apparent simplicity where what is seen is just a tomato, a wedge, a quadrant of tomato. Yet in order to do that, at a fundamental level, we have presented not so much what is seen as what we (photographers) want to be seen as the seen. Clearly we do this all the time with more complex images. Take my picture of the rupa on my shrine. It is simple enough notwithstanding what it is of and what it represents with the addition of the two items I have added to it, a symbol of blue to remind me of Akshobya and a book at the Buddha’s feet to represent the Dharma. There is a plain background which I manufactured so as to further isolate the figure. Actually what I saw with my eyes is closer to what is apparent in the other shot – you may just make out my shrine in the top third of the picture, about a third in from the left. (Unconscious use of classic thirds maybe?)

I am not sure I want to start taking all my pictures in this way, somehow trying to replicate a seemingly haphazard way in the human eye scans and absorbs the visual environment, but it is somehow an encouragement to be simpler in approach and to try less yet at the same time to deepen our understanding of what is going on and what we bring to a picture. These are not neutral choices and they may be made through instinct and ignorance. As photographers we always bring certain elements to a visual situation and overlay it with choices and pre-conceptions. We rarely - if ever - just take things as they are. Even the simplest of pictures is highly pre-constructed.

The same could be said of mind. How often do we really see ‘things as they really are’? How often do we just see what our eyes show us, hear what our ears deliver, use our imagination not for mere fantasy but for access into the nature of reality instead of seeing what we hope, want, dread and fear to see, and hearing the unsaid and imposing so many narratives onto our experience like some over-worked Bollywood metteur en scène? © www.roypeters.co.uk

Hi Roy, great to see this blog and to explore your take on this once again. Many years ago as I recall you lectured on this subject on our MA. I remember leaving a tomato segment complete with flap on the table after the lunchbreak, kind of an 'apple for teacher' moment I guess.

Yes indeed! I certainly had not forgotten, Roy. It was a magic moment and took representation to another replace beyond words, beyond the image.