- A Note in Passing: Jack Jones 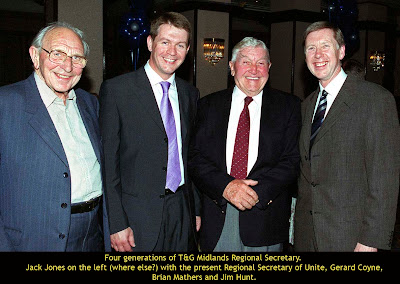 The weight of this sad time we must obey;

Speak what we feel, not what we ought to say.

The oldest hath borne most: we that are young

Shall never see so much, nor live so long.

Today saw the commemoration of the life of Jack Jones, trade union leader, who died earlier this year. It was a moving affair with tributes from all quarters of the labour movement world including Spain where he went to fight against Franco in the thirties. In this era of celebrity culture where a few moments of fame and notoriety are dangled on the same piece of coarse string in front of an ever increasing would-be constituency of keen takers who seek out the limelight just because it’s there, Jack Jones’ life and times are 96 years’ worth of reminder that becoming well-known may just be a by-product of having spent a life dedicated in the service of other people. At the core of Jack’s life was an unstinting mission to improve the lives of others. His socialist syndicalist beliefs were so deeply established that it was easy for him to follow them through with self-less acts and actions. What came easy to him, many of the rest us would find difficult to emulate. When he retired from the T&G he started the pensioners’ movement with the same amount of vigour and dedication and commitment. And success. He stood for far more than the wages and conditions side of trade unionism, important though those concerns are. Just today Tony Woodley, the current joint General Secretary, of Unite (the latest incarnation of the T&G) reminded us that this is part of his legacy when he said that what the union fights for now it isn’t just wages and conditions but for the happiness of its members. Sardhu to that! © www.roypeters.co.uk