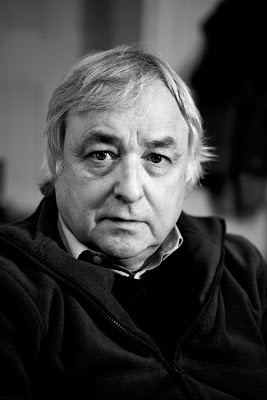 I used to be a sports photographer. In those days in order to ‘protect’ the profession you needed not only to be a member of the NUJ (which to qualify for this membership, you needed to prove that you earner over 70 odd per cent of your income form journalism) you also needed to join the PSPA, the Professional Sports Photographers’ Association, where you had to prove that 90 per cent of your income derived from sports photography. Once these criteria were met you could be sure that though we were wide-ranging in the kinds of work we did and markets we served, and certainly in terms of personality all human-kind was represented, we were nonetheless conjoined and initiated in similar arts and practices which meant that we actually had quite a bit in common. So there was that mixture of sharing similar tools and setting about similar tasks with the richness which came from the variety of personalities who were involved.

I don’t know how all this works or fits together today, but a leading luminary in the PSPA and an elder statesman in the sports photographic world, George Herringshaw seems to trying to pull together a notion of this brother-(and some sister-)hood. So many practitioners have come and gone over the decades and many more have retired, just as much as many newbies have entered the fray. Merely by sending out block emails to all current and past members, George has been keeping us up to date with some of the passing of past personnel and what has been going on for others.

It was in this spirit that I leapt at the idea of doing an interview with a very dear friend of mine and stalwart tennis photographer, Michael Cole, who had notched up his 40th consecutive Wimbledon last year. Although Michael has been a constant on the tennis circuit over the years, not just at Wimbledon but also as a regular at the French Open, the US Open, the Lipton (now Sony Ericsson) Florida and the occasional Italian Open amongst others, many of the younger generation may not have clocked who he is and just what he has achieved. What a great excuse to pop down to Beckenham and spend some time with him, mess around with a camera body he adores and which I had never previously got on with - the Canon 5D - and take a snap of him with it. Here is the result of that encounter...

Last year Michael Cole notched up his 40th consecutive Wimbledon. In May he will add the French Open to that formidable achievement – and he doesn’t look a day over 41. He can also add 20 Miamis and 20 New Yorks to that tally too, but he is very much synonymous with Wimbledon an inherited trait from his dad Arthur who had been taking pictures there for some 40 years. On his first visit, he photographed the marathon match between Gozales and Pasarell. The general advice from his dad was merely to ‘look for anything unusual’ and to try to, “Get the player diving - going for the ball”. Apart from those pointers he left Michael to his own devices – basically just to get around the courts and get on with it. Now he has accumulated images of all the major – and quite a few of the minor - players and more than a fair share of the decisive moments across six decades if you include Arthur’s work.

Turning to equipment and stock over the years, in 1969 he used a Pentax SV with a manual shut down 135mm F2.8 Tamron lens. This was perfectly adequate at the time for volleys from the side of court. In the Gonzales-Pasarell match, for some reason, he ended up using a Rolleiflex - which he found awkward and clumsy for tennis - loaded with Agfapan 1000 because of the fading and appalling light.

The Pentax was replaced by a Nikon F with noisy motordrive attached. Michael still has a lot of his old cameras, including the Pentax and Nikon F. Being a bit of a sentimentalist he finds it difficult to part with certain things - this amazingly includes his old school blazer, cap and tie as well as a pair of swimming trunks - all from the 50's! He rates the legendary Nikon F as the toughest body of them all - built to last, he reckons. The 180mm F2.8 was predominantly used courtside as well as sometimes the Novoflex but he never really got to grips with that squeeze-trigger focussing. A while later, he acquired a 400mm F5.6 Nikkor lens - a slow lens but remembering he was shooting predominantly b&w at this time this wasn't too much of an issue. In those days he never used zoom lenses because they were 'soft' compared to primes. The Nikon F was superseded by the F2 to be followed by the F3 and the 400mm F5.6 was upgraded to the F3.5. 1991 saw Michael switching to Canon acquiring an EOS 1 with a 200mm F1.8 with both the 1.4x & 2x converters. Later he added a 500mm F4.5 which was his favourite lens for down-court and was razor sharp. He got Canon to change the polarity on his lenses because he had got so used to the Nikon direction. He still uses Canon lenses with reversed (Nikon) polarity today.

Stock wise, the benchmark was Kodachrome 64 because of its well established stability and reliability. He still has some dating back to the early 1950s. However, this is more than a difficult film emulsion to scan these days. Occasionally, he would also use High Speed Ektachrome which gave an overall 'blue' hue in overcast conditions and was also quite grainy but speed was of the essence in such conditions. The emergence of Kodachrome 200 was an interesting innovation with its tight sharp grain texture but somehow it lent itself more to available light portraits rather than to tennis. Kodak gave him several boxes of this to 'test drive' before it went into full production. He also experimented with GAF 500 which was even grainier.

Throughout his career, and it is by no means over yet, he has followed his dad’s early advice and sought out the unusual. In fact that is very much a hallmark of his work and approach. In 1994, Tennis Week magazine in New York voted him the Best Tennis Photographer in the World. Michael was humbled by this and was quick to point out that this was the opinion of one tennis magazine's findings. In the early ‘80s, he acknowledges a debt to Racquet magazine in New York and Tennis Revue in Germany both of whom enthusiastically gave him a platform for what he calls his ‘details photography’, often publishing his interpretations full-page over a number of years. This took him away from merely supplying backhands and forehands month in month out. Before 1979/80 how many other tennis photographers were taking these kind of shots on the tennis courts and getting them published regularly? Michael was a creative innovator and still has the appetite to continue that tradition.

As far as meeting client expectations is concerned, it has never been an issue for him: editors either liked or needed his pictures or they didn’t. Michael is of the opinion that every photographer has his own approach to a subject and to be influenced to stray from that path is not something he would contemplate.

In terms of the competitor environment over the years, it is certainly true that more competition means fewer opportunities to sell these specialised images but Michael reckons competition is healthy. In such a specialised market, he perceives that because of the deals being done, there is a significant number of great photos out there which never get to be published where they should be. Driven by cost, publishers seem to be in favour of all in deals at the best price rather than the quality of images supplied. Such deals, he feels, mean that really creative pictures are no longer sought after and published on merit.

When not photographing tennis Michael likes to get involved with photographing classic and sports cars which involves going to meetings and events such as Goodwood and Brands Hatch. E-type magazine regularly use his pictures on their covers. Recently, Michael did a feature on stripping the body of his own car, a specialised task away from photography which he undertook himself.

He also loves his stock photography too and has a good deal of travel photos in his collection. His images of Venice are quite stunning and have been widely used in travel magazines and in a series of greetings cards and even by the National Trust to promote music festivals in England.

He is not just first and foremost a photographer then a tennis or sports buff. He is entirely and exclusively a photographer, tennis happens to be both his canvass and palette. Had he not have turned up to Wimbledon all those years ago he would quite probably followed a fine art route having spent five years training at Beckenham School of Art and later at The Ravensbourne College of Art & Design.

Q: Favourite piece of kit of all time?

A: French Open. Love the ambience, the spectators, the fashion and the glamour and the late afternoon/early evening light - for those reasons it's the best Grand Slam for me.

A: Connors, Mac, Borg, Nastase spring to mind immediately because of the many pictures they "gave me". I'm almost grateful to them for being around competing when I was around working and I count myself lucky to have been on court to photograph them for so many years. Charismatic characters all of them.

A: Scallops in their shells.

A: Champagne but dry sparkling cider is a good substitute. The occasional Sussex real ale, too.

A: The Stones, Chuck Berry, Dylan (timeless - I get into Dylan every so often on a regular basis - love the lyrics and the monotony of the music - Gawd that dates me! Trad jazz and Chopin piano music too.

A: Carve Her Name with Pride.

Ernst Haas. I'd never heard of him until I was on a Marlboro shoot in the mid 80's and one of the cowboys showed me one of his books and I was just totally inspired - the images excited me. I was and still am passionate about his work.

A: John Cleese especially in Fawlty Towers. John Shuttleworth, too, but that is almost documentary!

A very enjoyable read, thank you. I didn't know that Michael liked scallops!!!

Michael is one of the greats. No, I didn't know about the scallops either!